George graduated from the University of Chichester with a 2:1 BSc (Hons) Degree in Sports Therapy in 2016. He gained his clinical experience, volunteering at Up and Running while he was at University and gained further experience in the Pitch side environment for the various outreach programs we provide. Our outreach programmes, include a variety of sports such as rugby, football, netball, hockey, lacrosse and swimming which are associated with Portsmouth Grammar School, St John's College, Portsmouth University, Portsmouth North Sea and the RFU.

Since graduating in 2016, George has officially become a part of the Up and Running Team within the clinic and continued to provide pitch side first aid for our outreach programmes.

George is a keen sportsman who is interested in Rugby, Football, Athletics and Weight Lifting. He has played rugby since a young age and has had the opportunity to perform at the Elite level by representing Hampshire and London Irish. Due to George's career in rugby he has been subjected to numerous injuries and understands the physical and psychological implications an injury can have on an individual whether that being in a sporting or occupational environment.

The knowledge George has experienced in his sports therapy and rugby career has contributed to him believing that everyone deserves the same standard of treatment and rehabilitation know matter their ability, whether that being from the Elite Athlete to the Amateur athlete, young or old. 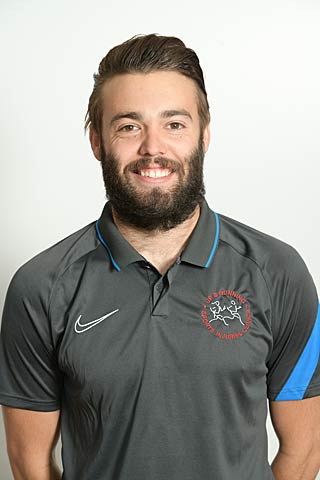 Up And Running is based in the The Mountbatten Sports Centre, Alexandra Park, and at The Pyramids Centre, Southsea and serves the surrounding towns in Fareham, Gosport, Havant, Waterlooville and Southern Hampshire 7 days a week & most evenings. See our Contact/Location page.